How rising mobile transactions can help you reduce Mainframe costs

20 years ago, the Mainframe was the operating system of choice to host applications critical for business operation. And 20 years ago, for the minority of people who had a mobile phone, functionality was limited to, well phone calls (and maybe the Snake game). Even SMS texting was years away for the majority of people. It was early days for the World Wide Web, the first version of Internet Explorer wasn’t released until August 1995, and the majority of people had never heard of the internet let alone used it.

Back in 1994 online retail was in its infancy; there was no Amazon and no eBay. If you wanted to buy something, you would visit the shopping mall or the high street, and the only way to access bank accounts was via a visit to your local branch. So the thought of accessing personal banking information and buying pretty much anything you want, via a mobile phone, was the stuff of science fiction.

Step forward 20 years to today and online retail and management of bank accounts via our mobile phones are common place.  And now with more mobile phones on the planet than people, mobile originating retail transactions are expected to increase significantly over the coming years, particularly with the rapid increase in tablet ownership.

Online retail sales on the rise 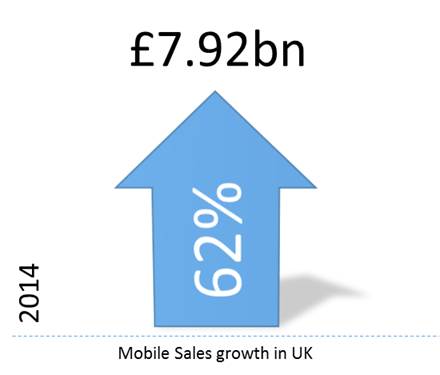 “OK I’m with you so far, Mobile transactions are increasing” I hear you say, “but what does this have to do with Mainframe cost reduction?” Well, if your applications servicing mobile transactions are hosted on z/OS then you may be missing out on significant reductions in licence charges. In May 2014 IBM announced MWP (Mobile Workload Pricing) for z/OS, enabling customers utilising CICS, WebSphere, IMS or DB2 for z/OS to reduce cost of mobile transaction growth by mitigating impact of mobile workload on peak capacity related licence charges. Eligible software is also known as Mobile Workload Pricing Defining Programs or MWPDPs for short.

Sounds too good to be true?

If you pass these requirements, then there are a few further actions needed before reductions can be realised

So how does MWRT reduce cost?

“MWRT will calculate the rolling 4-hour average (R4HA) of the reported mobile transaction general purpose processor time consumed by the Mobile Workload Pricing Defining Programs and subtract 60% of those values from the traditional sub-capacity MSUs for all sub-capacity eligible programs running in the same LPAR(s) as the mobile workloads, on an hour-by-hour basis, per LPAR. MWRT will determine the billable MSU peak for a given program on a machine using the adjusted MSU values”

The key to this is a customer generated csv file that reports the Mobile Transaction CPU and is imported to the MWRT tool. Capture of General CPU consumption by Mobile originating transactions, for all eligible MWPDPs, by hour.

The CPU seconds reported in the csv file are used to calculate the reduction to the Peak R4HA for the reported LPAR(s). The reduction is seen in the reported MSUs for that LPAR and therefore the associated software running on that LPAR.

The reporting of Mobile Transaction CPU requires these transactions to be flagged, which might involve a Server application identifying mobile transactions sent to the mainframe. Flagging could mean extra information sent within the message, special transaction id’s, or special userids…
The generated csv file, along with the SMF 70 and 89 data must be input to the MWRT Tool to obtain the discount.

Find out more about Mainframe Cost Management or contact us.