Tell me more
Return to Listings
2013 Posted by Julian Stuhler

Wow, what a week!

I just got back from attending IDUG’s annual European DB2 Technical Conference in sunny Barcelona. I’ve been attending IDUG events for nearly 20 years, and I can honestly say this was one of the best – especially fitting given that it also happened to be DB2’s 30th birthday and IDUG’s 25th.

The week got off to a great start on Sunday night with some traditional tapas and a few drinks with some old friends, only slightly marred by my luggage being delayed in transit somewhere between Gatwick and Barcelona. Monday was my main opportunity to attend some technical sessions, and I got some great information from John Campbell (DB2 11 for z/OS Technical Overview) and Frank Petersen (access path assurance when implementing a new DB2 release).  After a video recording session to provide some DB2 11 for z/OS quotes and experiences for IBM and quick interlude to help set up for Monday evening’s Triton party, it was down to the vendor hall for food, drinks and a book signing for  the new DB2 11 flashbook that I contributed to along with my good friends Cristian Molaro and Terry Purcell. 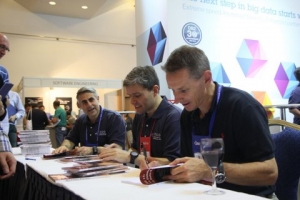 At 8.30pm the party moved to the top floor of the conference hotel, with spectacular views over the Barcelona skyline, the Ultimate DB2 Geek quiz and our very own giant DB2 Geek birthday cake. Competition to be crowned Top Geek was fierce, with more than one person telling me that they were glad Triton didn’t set questions for the DB2 Certification tests! Mitja Makovec (DB2 z/OS) amd Ian Bjorhovde (DB2 LUW) were worthy winners, and overall it was a fantastic evening.

A beautiful evening in Barcelona at the Triton drinks reception

Tuesday started way to early with a rehearsal for the keynote, 30 Years of DB2 – Past, Present and Future. I had the easy job of dealing with the “present” part, and it was great to hear fellow presenters Bonnie Baker reminisce about DB2’s illustrious history and Tim Vincent speculate on it’s exciting future. After attending a couple more technical sessions, I gave a presentation based on the IDUG DB2 11 for z/OS User Experiences white paper I helped to produce a few weeks ago. Like all of the other DB2 11 presentations at the conference, this was well attended and interest in the new release seems very high given that it’s not due to become Generally Available until Friday 25th October. An exhausting Tuesday was rounded out by a quick IDUG Content Committee meeting followed that evening by yet more tapas with my Triton colleagues in a great restaurant in Barcelona’s winding backstreets.

Day 3 of the conference was a complete blur consisting mainly of Triton and IDUG duties but I did manage to make some time to take advantage of the excellent free technical certification offered by IBM at the conference. I was fortunate enough to pass my DB2 11 for z/OS DBA test, making it the first time I’ve been officially certified for a new release of DB2 before it even becomes Generally Available. I also helped out at the “Fun with SQL” session at the end of the day, a great IDUG innovation that replaces the usual technical presentation with a highly interactive format that has the audience split into teams solving various SQL challenges while being encouraged / teased by their peers. Wednesday evening meant it was time to head to Barcelona Zoo for a great party provided by IBM – an evening that provided both the highlight (being recognised by IBM with a “Top Consultant” award) and the low point (the rather embarrassing photos displayed as I accepted the award!) of my week.

Thursday morning  went by in a blur, moderating a well-received presentation on DB2 for LUW RCAC given by my Triton colleague Mark Gillis before attending a very entertaining closing keynote by Marcel den Hartog. After wishing my Triton colleagues farewell as they headed for the airport, I just had time to prepare for the One Day Seminar on DB2 for z/OS Memory Management that I gave on Friday before collapsing in an exhausted heap on the plane back to Gatwick that evening.

Barcelona 2013 was the very essence of IDUG – great technical presentations and great company in a fantastic city. Just a shame my luggage never got to share the experience with me!