Tell me more
Return to Listings
2018 Posted by James Gill

The DB2 for z/OS REST API has been available on V11 and V12 for a while now and has continued to evolve through IBMs continuous delivery maintenance strategy.

With the arrival of APAR PI98649 (V12 PTF UI58425, V11 PTF UI58431), the functionality has been extended to include commands to control the availability of services and the addition of a service versioning system.

REST service versioning has been introduced to support multiple versions of a service being active and usable at the same time. This means that if we need to modify an existing service, we can do this under a new version without replacing the existing service which may be in use by other clients.

Non-default versions are referenced using the same service name, but with the addition of the specific version to be used:

This allows the service to evolve over time, without risking disenfranchising users of older versions.

Versioning is enabled by installing PI98649 on ALL members of the data sharing group, and then tailoring and running job DSNTIJR2 (in SMP/E target.SDSNSAMP). This adds additional columns to the SYSIBM.DSNSERVICE REST catalog table.

Existing services cannot be versioned without dropping and redefining them.

Once enabled, all new services are versioned. If a version id (VARCHAR(64)) is specified it is used, otherwise REST applies ‘V1’. This version id is used for the service and the supporting package. It can be specified in the service creation parameters – e.g. Python: 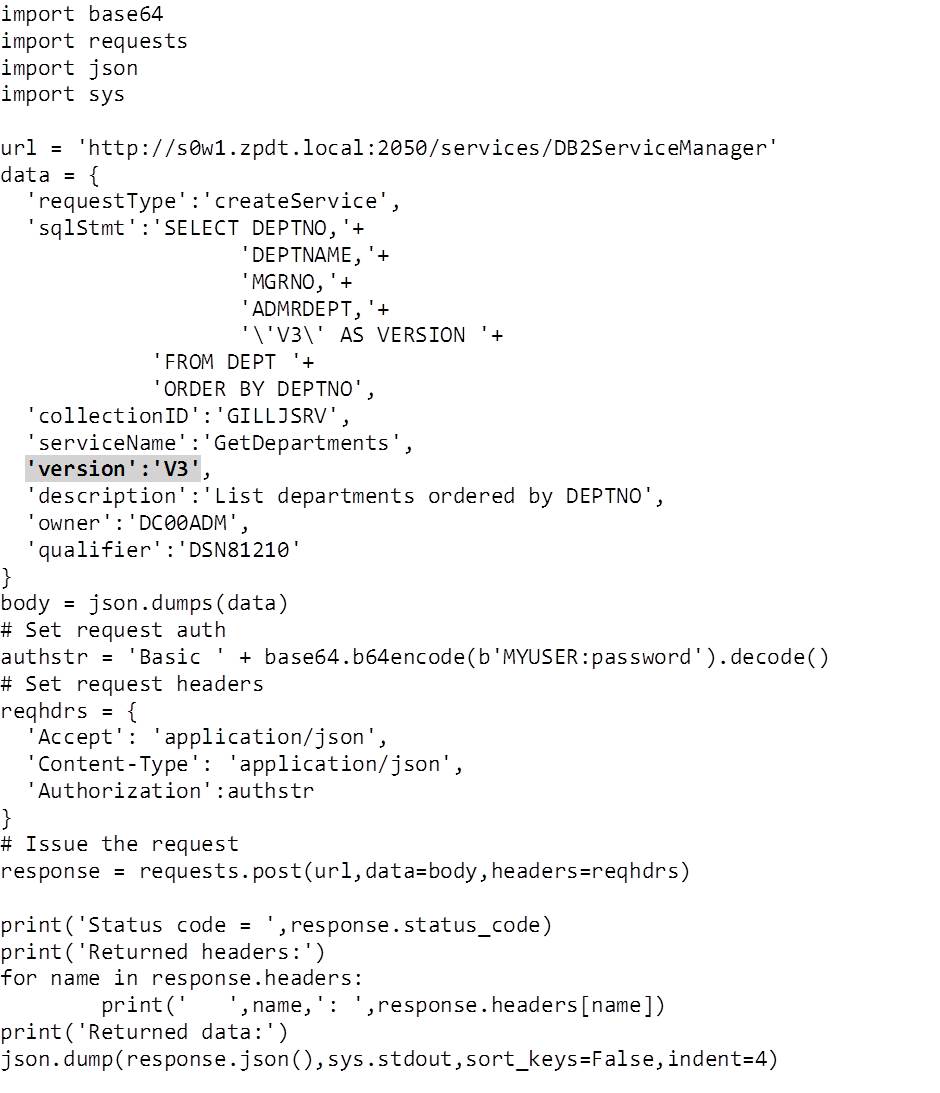 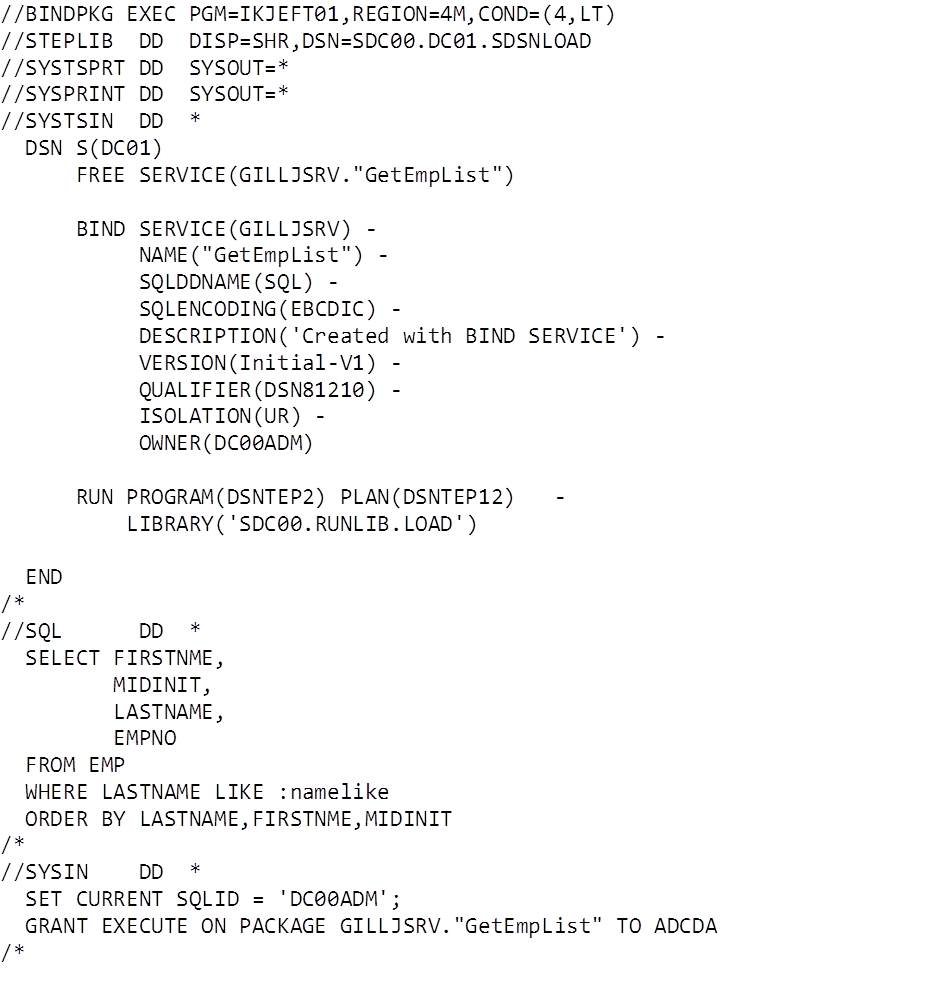 Note that in BIND SERVICE, VERSION does not allow quotes. Note also that we have to use double quotes in BIND and GRANT to reference mixed case service names.

How to Change the Default Version

Since this blog was originally written in 2018, IBM have released maintenance (PH34544 – May 2021) to manage the default service version. This is covered in a new blog post here. The following method is interesting from a historical point of view, but the REBIND…RESTSERVICEDEFAULT(YES) method is the recommended approach now.

Before you do this, remember that the default version is in place to support the first users of your service. If you change the default version, you will potentially stop these users from working. Before doing this, make sure that you understand the implications.

We did this as an exercise to allow us to tidy up some now unused versions of a service as you cannot issue FREE SERVICE against the default version:

Whilst not documented, the default version can be changed by modifying the contents of the REST catalog table SYSIBM.DSNSERVICE.

We chose to stop the services that were being changed to make them unavailable:

Then update the SYSIBM.DSNSERVICE table to make the default service V3: 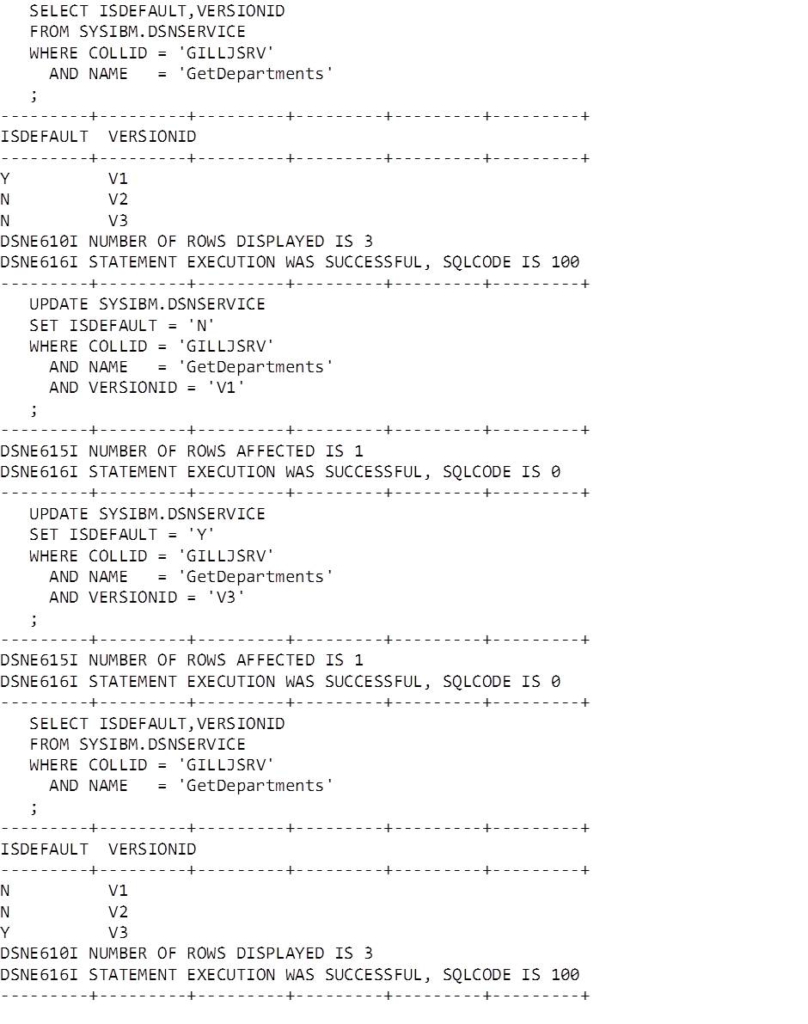 Restart the services and check that the change is applied:

We were then able to FREE the original default version:

The new commands are to help manage the availability of services, and to provide the flexibility to withdraw and reinstate them:

Note that the default scope of the commands is member (in a data sharing group) and that you need system privileges to run them – specifically one of:

Most folks use mixed case names for their services and you should be aware that to specify these correctly, the whole serviceRef should be enclosed in single quotes. E.g.

Note also that care should be used when deciding where to issue these commands. The DB2I Commands (option 7) panel folds all of the input to upper case before issuing it. If issuing from SDSF:

/-DISPLAY RESTSVC(‘GILLJSRV.GetDepartments’) -> folds command to upper case
/ and then entering the command on the following panel works

The command shows the status of services. The V12 manual entry is here:

Note that the service status (started or stopped) is also correctly reported in the DB2ServiceDiscover output – e.g.

The command stops the service or services specified and rejects attempts to run (POST) or query (GET) them. The V12 manual entry is here:

Note V1 is flagged with status STOPREJ* – the “*” indicates that this is the default version (used if a version is not specified with HTTP GET or POST).

Services that have been stopped return HTTP status code 503 (Service Unavailable) when run (POST) or queried (GET), and the service discovery reflects their availability:

The set status is maintained across DB2 restarts, as with other entities.

This command restarts stopped services and makes them available to respond to HTTP GET and POST commands. The V12 manual entry can be found here:

Again, like the -STOP command, unless you specify a specific version, all versions or the named service are started.

Some other items have been updated by APAR PI98649:

The handling of mixed case service names in the new commands feels a little clunky, as it doesn’t follow the syntax used in other commands and SQL statements.

IBM are, however, continuing to enhance the REST API as part of their commitment to continuous delivery. There are a lot of useful new elements introduced in this APAR which will help with the management of REST services provided by DB2.